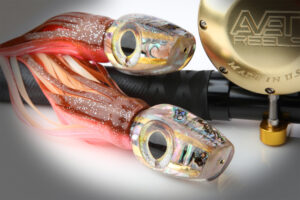 VI Lures founder and owner, Vincent Ivicevic, didn’t just stumble upon the fishing business, he was born into it. His grandfather provided for his family as a commercial fisherman, and his father taught him the ins and outs of fishing.

Vincent has four decades of lure making experience under his belt, and he has perfected his craft like no other. The creator of VI Lures has done it all—from hauling in marlin off the Gulf of Mexico to placing in Global Marlin Tournaments. He is not only an expert lure maker but a seasoned fisherman.

His cousin from Hawaii brought back to Vincent his vast knowledge and lure making ways, which further inspired Vincent’s early lures. A few years ago, he received a box from his father that contained some of his old fishing lures from back in the day, and thus VI Lures was born. What started as just making lures for family and friends, has turned into a thriving business that creates custom lures for fishermen all over the world.

For VI Lures, it is not just about making lures, it is about combining the art of fishing with the love of the sport to be passed down for generations to come. Every lure is handcrafted by Vincent himself and perfected by years of refined expertise, experience, and passion. These aren’t just ordinary lures. They are cultivated from the finest materials available on the market, and Vincent makes them personally from scratch. Each lure is made with one of a kind in-lay patterns and goes through testing to ensure they are balanced to run true.

Many lures have been handcrafted and distributed around the world by VI Lures. One customer came to Vincent, saddened by the loss of a special lure. All that remained of the lure was a photo, but with that photo, Vincent was able to create a replica of it. He doesn’t just create lures; he brings memories back to life. With his talent and skills, he was able to recreate a set of lures for this client that otherwise would have been lost forever. You can’t get this kind of quality and dedication anywhere else.

Customers have competed in tournaments, catching various species of Marlin, 300-pound Yellowfin Tuna, massive Wahoo, trophy Dorado, and more with their VI Lures. You can’t go wrong when you use these one of a kind lures.

The idea behind VI Lures is simple—to make lures, and help people catch their trophy fish. So, wherever you are from, whether you are a seasoned fisherman or just joining the sport, get yourself a one of a kind lure from VI Lures, and catch that once in a lifetime fish.